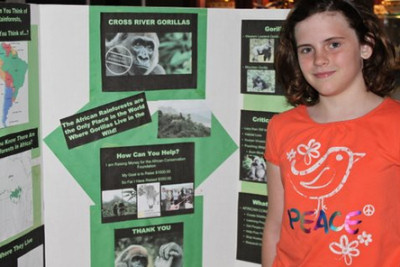 A gorilla species that’s been called Africa’s most-endangered primate has found an advocate in a League City girl.

Berit Doolittle, 11, learned about the Cross River Gorilla from her mother Daniette Hunter, who home-schools her in League City. Wildlife advocates say this particular species inhabits just a small region along the border between Nigeria and Cameroon, and its numbers may be below 300.

“She saw there were only 300 left, and she said, ‘What are we going to do?'” Hunter says. Between February and early May, Berit surprised her mother by zealously firing up a fund-raising campaign, going door-to-door in her neighborhood, reaching out-of-town families, and recruiting a third-grade class at Bay Area Charter School to help.

“To put a little drive into her at the beginning, [Berit’s grandfather] said, ‘Whatever you raise, I’ll match,’ thinking she’d probably raise $40,” Hunter says. It turns out Berit was able to raise $350-often a dollar bill or a handful of change at a time-and her grandfather honored his promise, bringing the total to $700. Hunter says her daughter did most of the work in collecting funds, while she and Berit’s father pitched in $20.

Berit’s goal was actually $1,000, but with the $700 raised, she and Hunter set out in search of a charity that would use that money for conservation efforts. They chose to send a check to the UK-based African Conservation Foundation.

Hunter says Berit has done all the research without a great deal of help from her parents. On the phone, Hunter has to double-check her information with Berit, who sounds very well-versed in the Cross River Gorilla’s plight.

“One of the things that disturbed us the most was the bush-meat aspect of why the gorillas were taken,” Hunter says. “It’s not enough to set up an area and say, ‘Don’t hunt here.’ They actually try to give alternatives to the local people.”

Consulting Berit, she also notes that the species faces dangers from poaching, deforestation, and human viruses.

“I’m a biologist by training, and I’m thinking, ‘There’s nothing you can do,'” Hunter says. “I have this totally cynical worldview, but she’s like, ‘No, we can do something!'”

ON BEHALF OF OUR LOCAL TEAM, THANK YOU VERY MUCH BERIT!!!

Your funds and awareness raising efforts are very impressive and inspiring for us all!