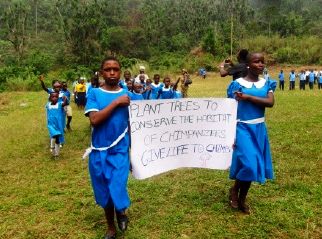 Environmental clubs of schools in Mak-Betchou and the Tofala areas made their mark in the celebrations of February 11, 2012 activities which had as theme ‘Youths and participation in Major accomplishment for an emerging Cameroon’.

As part of the programme, the different clubs marched with placards and banners carrying varied environmental messages like ‘Conserve our forests by reducing deforestation’, ‘Let’s joins hands to conserve gorillas and chimpanzees’, ‘Fight climate change by planting trees’ amongst others. Other clubs marched with green cards for the environment and drawings of some wildlife species they had done during their club activities.

The major highlight of this celebration was a drama acted in pidgin and English by the children of GHS Ngoh.This drama highlighted the resistance in some villages to stop hunting protected species and the consequences that befall them when they remain adamant to advice given by environmental specialists and conservationists.

The activities drew the attention of many who hitherto had no interest and information about the conservation status of wildlife species such as gorillas, elephants and chimpanzees found in their forests. Seeing children act out what happens in the environment was touching and confirms the fact that conservation education in schools is important in disseminating information and equally in training the next generation of conservation enthusiasts.

The activities were applauded by the administrative authorities in their speeches.