Rarest of All Apes

The Cross River Gorilla, with fewer than 300 individuals estimated to exist in the wild, and until 2016 one identified member in captivity, is the most endangered of the gorilla subspecies, and is listed by the IUCN as Critically Endangered.

This is the highest ranking for species that remain in the wild, and means that the population has decreased, or will decrease, by 80% within three generations.

The continued fragmentation of Cross River Gorilla habitat across a large, complex area, together with the threat from hunting and the small number of gorillas remaining, has led to its critically endangered status.

The Cross River Gorilla is one of the 25 most endangered primates worldwide, according to the IUCN.

Importance of the Cross River Gorilla

The Cross River Gorilla is a unique subspecies, that only lives in a relatively small area. With only a few hundred individuals remaining, it is in very real danger of becoming extinct unless it is properly cared for.

The Cross River region has been named as a biodiversity hotspot, that is a region with a high levels of species richness and endemism across a range of taxa, in this case including amphibians, butterflies, fish and small mammals. There are 34 of these hotspots, according to Conservation International, covering just 2.3% of the world’s land surface, but housing more than 50% of all terrestrial plant and animal biodiversity, including all 25 of the most endangered primates (26).

This particular hotspot is home to many primates, and a number of endemic species and subspecies other than the Cross River Gorilla. (e.g. Nigeria-Cameroon Chimpanzee, Preuss’s gibbon, forest elephants, forest buffalo, many species of duiker, 26 endemic birds.)

Several parts of the Cross River region have been designated by Birdlife International as important bird areas, and USAID’s Central African Regional Program for the Environment has named it a landscape of High Conservation Priority. It is also included in two of the WWFs Endangered Terrestrial Ecosystems. (13) 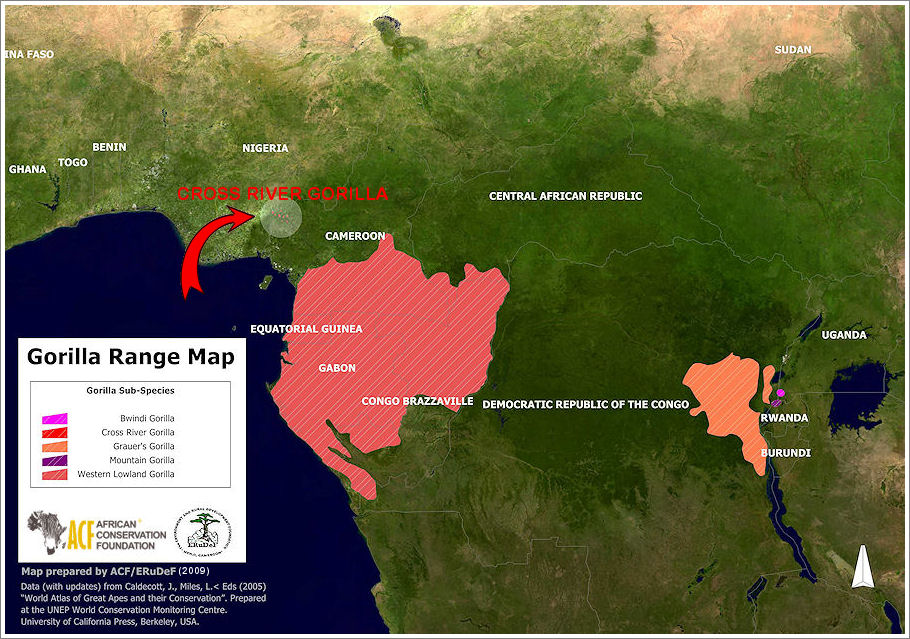