NYANGO: GORILLA IN OUR MIDST

Nyango was the only Cross River gorilla in captivity in the world, as an ambassador for her critically endangered species. This is the story of how she was found and rescued by the Punches Family.

January 22nd, 1994. Karen Punches had been to a one year “death celebration” in the village of Ossing in Cameroon’s South West Province the previous evening. The youth of the village had paraded into the meeting house with what Karen assumed was a chimpanzee tethered at the ankle. Now she was having second thoughts.

After consulting the encyclopedia, I loaded our three young children into the Land Cruiser and rushed back to Ossing. There, tied to a veranda support, was a two and a half year old female gorilla. They called her Rambo. I reached down and she climbed into my arms. I could feel shotgun pellets under the skin of her scalp, a clear clue as to the demise of her mother. The “owner” claimed he was not the hunter, just a local “trader”. I knew that if I didn’t get her out of there she would soon end up in a cooking pot.

Ignorantly, I negotiated a price of $40. I paid part. When the man came for the balance I informed him that if he ever brought me another ape I would have him arrested on the spot. He never came back.

I saw in her eyes the same depth and mystery I saw in the eyes of the old man helping us in our linguistic research. He was called “Sango” which meant father or teacher in the Duala language. I immediately renamed her “Nyango”, the Duala word for mother.

Getting Nyango into the car proved more painful than anticipated. Not knowing her previous car experiences, I opened the door and she bit into the left side of my chest leaving the first of numerous bruises over the next couple of months.

Once home, Nyango played with our kids beneath the mango tree next to our house in the village of Besongabang. We had lived in Cameroon since 1988, but this was the best entertainment yet. Danielle’s long blond hair fascinated Nyango. She used it to pull her around the compound. Danielle never shed a tear. She was beginning to fancy herself a gorilla trainer extraordinaire.

One immediate challenge was to figure out what to feed a growing gorilla. Bananas were good but too cliché. She enjoyed eating at (or on) the table with us. Her favorites were papaya, guavas, fruit smoothies, corn meal mush and fried plantains dipped in mayonnaise. When our menu didn’t suit her she would climb into the trees and munch on a few choice leaves. Nyango went from 28 pounds to 34 pounds in her brief time with us. At least we didn’t starve her. 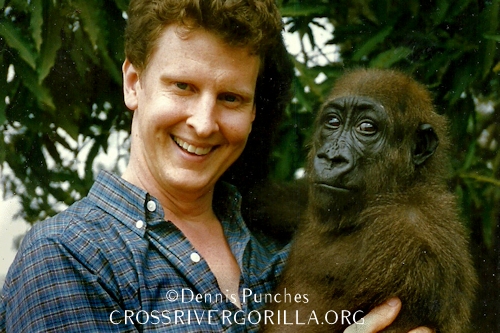 The following day the kids and I appeared at the foot of our bed with breakfast tray in hand and Nyango carrying a hand painted flag that said “Happy Birthday Mom!” I’m pretty sure I will never top that gift.

The days and weeks that followed were both fascinating and challenging beyond anything we could have imagined. At times, Nyango felt like one of the family. She played happily with the kids, teaching them to climb trees the gorilla way. Six year old Nate could often be found twenty feet in the air playing with Nyango among the branches. They would laugh and wrestle for hours. Yet, she never bit the kids. She loved them. They were the closest thing to family since she had been so violently ripped from her own.

In the late afternoon, though, her mood often changed. She would pound her chest and slap the walls. She threw chairs across the room and grabbed stuff off tables. She rambled out the door headed for who knows where. When I tried to bring her back I often got bit. Once she bit Karen’s leg thinking Karen was hurting our three year old son, Dustin, when in actuality he was crying because he was afraid of her. At times like this we realized we were in over our heads.

Rainy season was just cranking up. I was out late when a storm blew in with a vengeance. During a lighting flash Karen saw Nyango’s arm caught between the frame of her night enclosure and the corrugated tin that covered the door. Fearing she would sever an artery Karen rushed to get Sunday, our groundskeeper, who safely extricated Nyango from her peril. From that night on Nyango always slept with Sunday and he looked after her during the day while we worked. They became nearly inseperable.

The neighbors were not pleased that we had a gorilla in our home. She was a wild beast that should be out in the bush. They were right, but how do you return such a creature to the wild? She wouldn’t know where to begin.

A teacher from the school was returning home one afternoon when Nyango jumped from the bushes onto his back. Terrified, he came to our door asking if we could please remove our pet. While the situation struck us as humorous, it drove home the fact that we needed to find a new home for Nyango before something truly regrettable happened.

Returning from shopping one evening we found Peter and Liza Jenkins from the Limbe Wildlife Center waiting outside our home. They had heard through the grapevine that we had a baby gorilla two hundred miles to the north.

“Do you realize what you have here?”

We assured them we did.
Turns out we didn’t.
No one did.

Nyango came from a small population of gorillas in the mountainous rain forests between Cameroon and Nigeria. It was assumed that this was a separated pocket of Western Lowland Gorillas. It is now understood to be the rarest sub-species of gorillas on the planet, the Cross River Gorilla.

Nyango is the only one in captivity!

While Peter and Liza were amazed how Nyango thrived under our care, they explained that it was technically illegal for us to keep her. More important, she would be better off at the center with experienced professionals who understood her specific needs. We agreed and made arrangements to bring her to Limbe in three weeks.

As surprisingly as Nyango had entered our lives, we now braced for her departure. She had become intricately woven into the fabric of our family. We were blessed to have the opportunity to care for such a unique creation. One can’t stay long in a gorilla’s presence and not be somehow changed.

Sunday accompanied us to Limbe. He stayed there with Nyango for the first week to help her get adjusted. It wasn’t easy. She was their first gorilla and she really didn’t mix well with the chimps. She spent the first number of months roaming the grounds and terrorizing the center’s visitors. She liked to scare people. I think it amused her. Maybe it was some small measure of revenge. 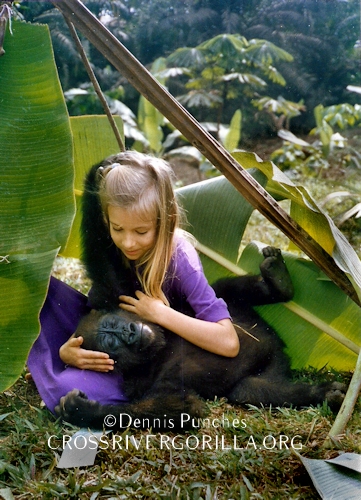 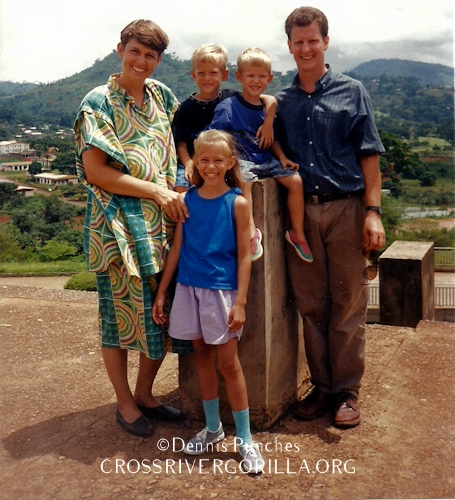 Finally, other orphaned gorillas were brought to the center and Nyango helped them get accustomed to their new home. She was beginning to live up to her name, “Mother”.

I visited Nyango as often as possible over the next few years. We would play together and she would gently gnaw on my fingers. We had a special bond. Such things are not easily forgotten.

Nyango is twenty years old now. She still presides as the matriarch of the Limbe Wildlife Center. I saw her just a couple of years ago. People always ask if she still remembers me. How I wish she could talk! How I wish I could ask her if she remembers my wife and kids, or even her own mother. How I wish I could understand what if feels like for her to live in the world of men. Does she know that she’s different? Does she know that it wasn’t supposed to be this way? She sits and stares. I wonder what she is thinking.

Nyango was the only Cross River Gorilla in captivity. We were blessed to be a part of her life. Yet, for all of the intrigue, I hope for the sake of the species and for the sake of each precious individual living free and wild she remains exactly that … forever the one and only.

NOTE: Nyango, the only known Cross River Gorilla in captivity, passed away on Thursday 10 October 10 2016, after suffering from protracted illness.

You can buy a print of Nyango through our online shop!