Afi is a region of rocky slopes and scarce vegetation, surrounded by 16 villages, and rapidly being eroded by spreading farms. There are estimated to be 600 illegal farms within the sanctuary boundaries. The tenuous forest corridor linking Afi to the Mbe Mountains is also under threat from encroaching farmland. Most of the outer slopes of the mountain have been affected by fire during the last ten years. Slopes that have been cleared by burning or landslips often support large herb patches that are a staple food source for the Afi gorillas. Illegal hunting continues, but is much reduced since the creation of the sanctuary and the institution of ranger patrols. Afi has been suggested as a possible site for ecotourism. (13)

Mbe is a community owned forest, with no formal protection. The gorillas here live in an area of ridges and valleys in the centre of the community forest, occasionally visiting the lowlands. The Conservation Association of the Mbe Mountains (CAMM) is organised by the nine surrounding communities who claim traditional ownership over the land. It intends to manage Mbe for the benefit of both wildlife and the community members. Logging, agricultural encroachment, fire and hunting are all serious threats. Local communities have agreed to limit hunting on the mountain, and negotiations are underway for the creation of a community run conservation area covering the gorilla’s range. Despite the informal conservation status of Mbe, wildlife seems to be more abundant here than in nearby protected areas. Mbe connects Afi and the Cross River National Park, although the link to Afi is broken by a paved road. (13)

Gorillas only live in the Okwangwo division of the Cross River National Park, which is the section to the north of the Cross River. There are two groups of gorillas here. One lives in the ridges and valleys of the Boshi extension forest (so called after the former forest reserve, one of four from which the park was created), while the other inhabits the Okwa hills in the centre of Okwangwo- the most lowland group of Cross River Gorillas. The Okwa gorillas also range over the border into Takamanda, but to the north, the Boshi forest is separated from Takamanda by a number of human settlements. Three villages are enclaved within the park (Okwa 1, Okwa 2, Okwangwo). The spread of farmland is a serious problem, threatening to split the Okwangwo division in two, isolating the Boshi gorillas from the rest of the park. Hunting is still an issue, despite the protection of the National Park, and there is also a threat from burning along the edge of the Obudu plateau. There has been some contention over the boundaries of the park. (13)

Takamanda was upgraded in 2008 from a Forest Reserve. (16) Four groups of gorillas use this park: Takamanda South (in low hills surrounded by human settlements), Takamanda East (also in hills near human settlements), Takamanda North (in an extremely steep and rocky area near the grassland-forest border, close to a village), and the border-crossing group that also uses the Cross River National Park. The villages of Obonui 1 and 3, Matene and Kekpane are enclaved within the park. The livelihoods of 15,000 people are estimated to rely on the forests of Takamanda. Timber and non-timber forest products (NTFPs) such as bushmeat, bush mangoes and edible leaves are extracted, and often traded across the border into Nigeria. The bushmeat trade is a particularly large drain on Takamanda. Road improvements threaten to increase the pressure on the area. (13)

Gorillas were only confirmed to live within Mone in 2000, and large areas of forest adjoining it have yet to be thoroughly searched. The vegetation here is similar to Takamanda, but the landscape is much more diverse, scattered with hills. There is also believed to be a larger population of elephants here than in Takamanda. Uncontrolled hunting and timber and NTFP extraction are major problems throughout Mone, and it urgently needs formal protection to ensure its future. (13)

Mbulu is an area of mature forest, with grasslands to the north, connecting Takamanda and Mone. To the south is more forest, which remains to be properly surveyed. A new road threatens to sever the link with Takamanda, and would also ease access for hunters into the area, and facilitate more habitat destruction. The gorillas here live on a long highland ridge between four villages. Small settlements are scattered throughout Mbulu, and with poor road access, the inhabitants depend on hunting, farming, tree-cutting and harvesting NTFPs. Since there is no formal protection, land use is under little control. Hunting is the main threat in Mbulu. Some form of protection is needed. (13)

Kagwene is a mosaic of montane and submontane forest and grassland. It became a Gorilla Sanctuary in 2008. (15) This is the highest altitude at which Cross River Gorillas are found. Nine villages surround the mountain. Hunting has almost wiped out large and medium sized mammals, but the gorillas have been protected by a traditional ban on hunting them. Since 2005 a locally employed anti-poaching team has reduced trapping. Habitat loss is the most serious threat here, with the forest being converted to farmland and grasslands for cattle. (13)

Gorillas were only recently discovered here, in an area of lowland and submontane forest between Bechati, Fossimond, Besali and the Mone Forst Reserve. A local ban on gorilla hunting has been in place since conservation efforts began in 2003. Unconfirmed sightings in nearby forests await further surveys. The gorillas here are about 60km from the nearest known Cross River Gorilla group, and 25km from the edge of Mone. There are ten main settlements in the surrounding area from which people use the forest. Hunting, habitat loss and road development are all problems at this site. A logging concession and an oil-palm plantation nearby both threaten to expand into the forest, and local communities have been asking traditional rulers to allow farming of the steep mountain slopes.¬† A survey is planned to discover whether a potential corridor for gorilla movement exists between Bechati and Mone. (13) 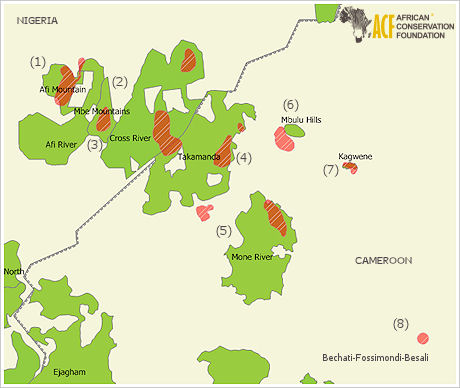