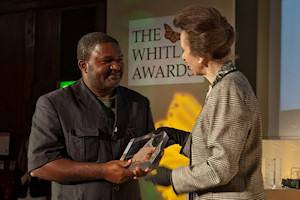 LONDON – HRH The Princess Royal (Princess Anne) tonight presented one of the world’s top prizes for grassroots nature conservation – a Whitley Award – to Louis Nkembi of Cameroon, for his work to introduce community-based landscape and biodiversity management to the Lebialem Highlands – a refuge for many rare plants, birds and other animals, including chimpanzees, drills and Africa’s most endangered great ape, the cross river gorilla.

Mr Nkembi, the founder and director of the Environmental and Rural Development Foundation (ERuDeF), received his honour during a ceremony at the Royal Geographical Society, London, hosted by The Whitley Fund for Nature (WFN) – the UK-based charity behind the international awards scheme.

The Whitley Award for Louis Nkembi includes a project grant of ¬£30,000 – donated by WildInvest – an engraved trophy, membership of the influential network of past Whitley Award winners, international recognition and leadership development training.

The award to Louis Nkembi recognises his work to protect the globally-important rainforests of the Lebialem Highlands and the region’s rare and special wildlife from damage in the face of a rising human population, deforestation, poaching, over-hunting and habitat fragmentation. Louis’ approach combines science, education and community involvement, both in wildlife surveys and livelihood projects.

The evening’s top prize – the ¬£60,000 Whitley Gold Award – went to Dr Angela Maldonado of Colombia for her efforts around the Colombia-Peru border to end the illegal capture of night monkeys for biomedical research, including by developing alternative, sustainable, ways for rainforest communities to earn a living.

For more details about the finalists and their projects, please see the Notes overleaf.

Commenting on Louis Nkembi’s success, Georgina Domberger, Director of The Whitley Fund for Nature, said: “The aim of the Whitley Awards is to identify and fund leading grassroots conservationists from around the world who are using their scientific expertise and local knowledge to inspire real and positive change for people and wildlife and the habitats they share

“In the case of Louis Nkembi, the judges were particularly impressed by the determination he and local people are investing in safeguarding the rich and varied wildlife of the Lebialem Highlands and by the extraordinary finds still being made there, including the re-discovery of two very rare birds: the Bannerman’s Turaco and Banded Wattle-eye, and a previously unknown population of cross river gorilla, Africa’s most endangered great ape.”

The ceremony at which Louis Nkembi received his accolade was co-hosted by BBC wildlife presenter Kate Humble and witnessed by a 350-strong audience which included embassy representatives, Whitley Fund for Nature donors, including HSBC, and WWF-UK, and leading environmentalists.

In all, grants worth £270,000 were presented, bringing the total amount distributed by the Whitley Awards since their inception to ¬£6m across 55 countries.

The Whitley Awards scheme is an annual competition, now in its 17th year. It exists to identify, fund and encourage inspirational local conservation leaders and their teams in developing countries. To find out more about the charity and its work please see: www.whitleyaward.org