Conservationists have captured images of a group of rare Cross River gorillas with multiple babies in Nigeria’s Mbe mountains – a sign that the subspecies once feared to be extinct is reproducing amid protection efforts.

Only 300 Cross River gorillas (Gorilla gorilla diehli) are known to live in the wild, making them the most endangered gorilla sub-species. The animals are found only in an isolated region along the Nigeria/Cameroon border.

Cross River gorillas are rarely seen, let alone photographed, even by remote cameras. Previously, camera traps at project sites in Cameroon and Nigeria have captured just a few images including one from 2012 in Cameroon’s Kagwene Gorilla Sanctuary showing one member of the group missing a hand likely from snare injury. In the Mbe Mountains and Afi Mountains in Nigeria, camera traps photographed a mother carrying a single infant on her back and lone silverbacks on separate occasions. Those images were obtained in 2013 and on separate occasions since then, but these recent images are the first time that multiple infants have been recorded in the same group. 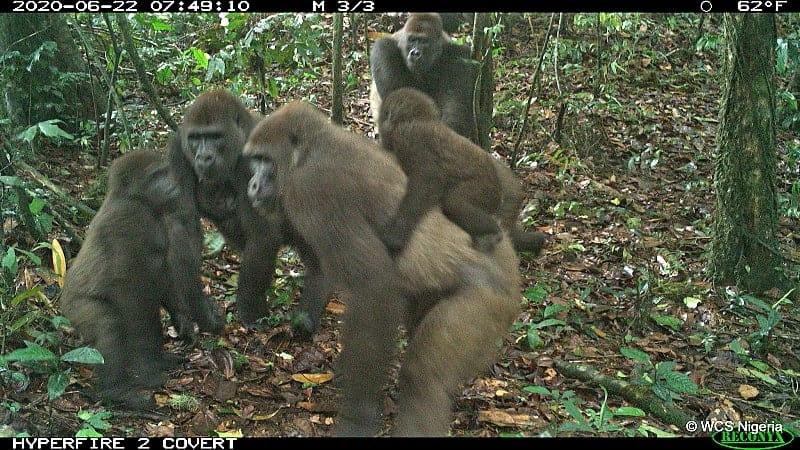 Extremely elusive due to a long history of persecution, Cross River gorillas live in the most rugged and inaccessible parts of their range. Their presence can be detected mainly by indirect signs such as nests, dung and feeding trails. They are distributed patchily over a mountainous, forested landscape spanning some 12,000 square kilometres across the transboundary region of Cross River Nigeria and Takmanda-Mone Cameroon. The Tofala Hill Wildlife Sanctuary, part of the conservation complex set up by the Environment and Rural Development Foundation and the African Conservation Foundation in Cameroon, is the southernmost range of the subspecies.

The Mbe Mountains forest, which is home to about a third of the Nigeria gorilla population, and provide an important link between Afi Mountain and Okwangwo, have been managed jointly by the Wildlife Conservation Society (WCS) and the Conservation Association of the Mbe Mountains as a community wildlife sanctuary since 2005. An alliance of nine local communities, forming together the Conservation Association of the Mbe Mountains, has been working together since the mid-1990s to help protect Cross River gorillas. Since that time, there have been no recorded deaths in Nigeria. 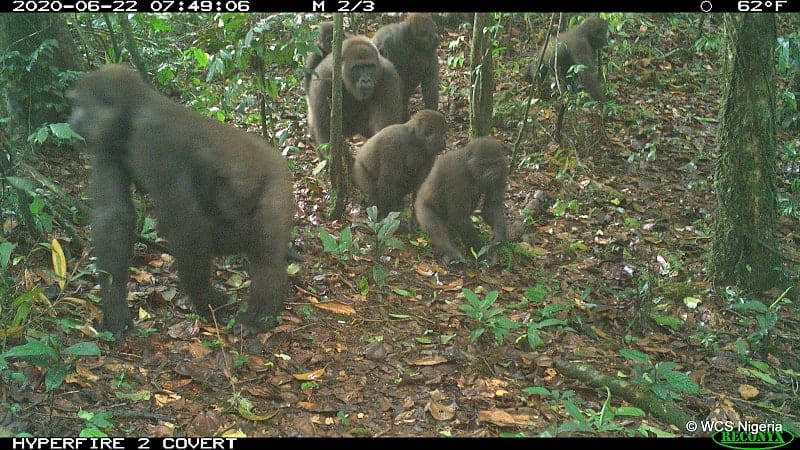 Inaoyom Imong, Director of WCS Nigeria’s Cross River Landscape said: “It is extremely exciting to see so many young Cross River gorillas – an encouraging indication that these gorillas are now well protected and reproducing successfully, after previous decades of hunting. While hunters in the region may no longer target gorillas, the threat of hunting remains, and we need to continue to improve the effectiveness of our protection efforts.”

Conservationists and local communities hope the camera-trap images of Cross River gorilla babies are a sign of population recovery.

Otu Bernard A. Eban, Clan Head of Abo Clan, said: “Seeing this today rekindles my hope that our communities will benefit from ecotourism in the future.  We will further strengthen our local laws to protect Cross River gorillas in the Mbe Mountains.  I wish to take this opportunity to appeal to our partners to support us more to find sustainable economic alternatives to bushmeat hunting and other activities that destroy our forest.”