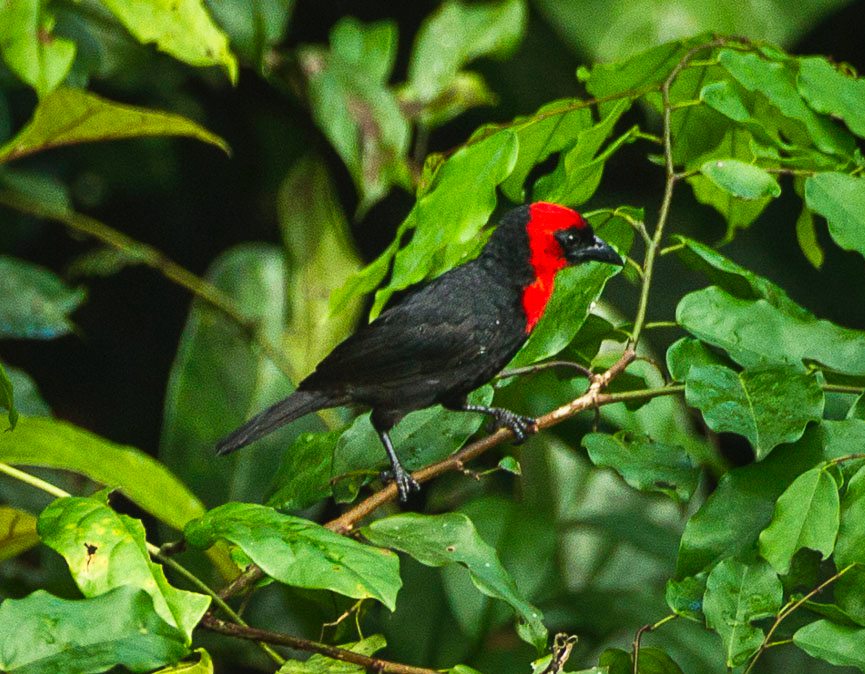 The Ibadan Malimbe (Malimbus ibadanensis) hitherto thought to exist only in Nigeria and Ghana was recently captured in the Lebialem Mone forest in the South West region of Cameroon by the camera of a group of biologists from the Environment and Rural Development Foundation, ERuDeF.

These researchers were accompanied by international volunteers from USA, Germany and England. They went to the Tofala-Mone Corridor for monthly bio-monitoring activities and spotted this bird on a tree close to the banks of River Bokwa, located at longitude 571965 and latitude 630194 with an elevation of 165m above sea level. While at the camp site, the team of biologists plus the volunteers carefully identified the bird species from the Birds for West Africa guide book. They went ahead to compare the physical characteristics of the bird caught with the cameras, with that from the book. It was discovered that it was the Ibadan Malimbe. Even though photographs had been taken of the red-headed Malimbe (Malimbus rubricollis) and some other Malimbes, the team made sure that it was a different species from these Malimbes

First ever captured in the town of Ibadan Nigeria, the Ibadan malimbe is about 20 cm large, .Themales have scarlet head, neck, throat and breast and the red colour on breast extends onto belly. The rest of the feathers are black. The adult females have red confined to crown and nape with thin, red breast band. They produce a chup ee wurr followed by a wheez sound.

Current IUCN red list has categorized this bird as Endangered. It is in the Family of Ploceidae (Weaver allies). It has a population size range of 930-2900 mature individuals and the distribution size (breeding/resident) is 13,200 kilometer square.

The species name was given by Elgood. According to Elgood et al. 1994, Malimbus ibadanensis was known only in South Western Nigeria in the following sites; Ibadan, Ife, Iperu and Ilaro. This bird was also spotted in Kakum National park in Ghana but records are yet to be confirmed. Thus it was thought that the home range of Ibadan Malimbe was limited to South-West Nigeria and the Kakum National Park of Ghana.

Malimbus ibadanensis is known to inhabit forest patches, forest edges, secondary woodland and even highly degraded farmland and gardens. According to Manu et al.2005, the species abundance in the forest patches decreases with increased isolation, although it seem to be unaffected by the area of forest fragments and can persist in patches as small as 0.2 kilometer square.

With widespread forest clearing for cocoa plantations in the Tofala-Mone forest corridor and the lack of knowledge regarding the status of Malimbus ibadanesis in Cameroon, the researchers are calling for an urgent need for further research to determine the conservation status of this colorful bird in the Tofala area and give it the protection it deserves.