B.C. couple on mission to save endangered gorilla band 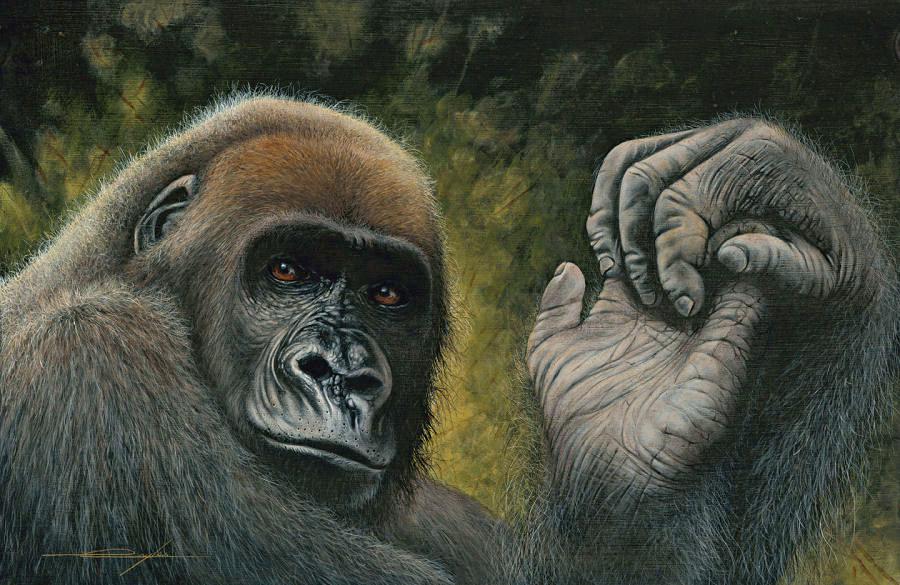 The gorilla stares out searchingly, a slight quiver on its lip, as it folds its fingers and holds its own hands. The image is strikingly real. But it’s also a painting. Coquitlam resident Daniel Taylor worked for months, painstakingly recreating the critically threatened primate he encountered in Cameroon last year.

What he was painting were the very things that have led to the animal’s near-extinction: the Cross River gorilla is the most critically endangered gorilla in the world – suffering from a shrinking habitat and poaching for its head and hands, which are valued as totems – but few are aware of its plight.

There are only 200 to 300 left in the jungles and highlands of Cameroon and Nigeria, and only one in captivity. Without serious intervention, they will likely disappear in a decade.

Lack of habitat, deforestation and human development, he says, have pushed these animals up against the mountainside. Their numbers are so sparse and the terrain so degraded by man that, “the chances of them mating is almost nil now.”

The Cross River gorilla has had no animal-rights champion in the way that the mountain gorilla (in Rwanda, Uganda and Congo) had Dian Fossey to advocate for its survival through the 1970s and 1980s, so its fate has remained a relative secret.

That’s something that Daniel and his wife, Ginette, want to change.

Following their month-long trip to Cameroon in November, the Taylors came back committed to advocating for the Cross River gorilla and fundraising for an African Conservation Foundation’s plan to save it. They will raise money needed through sales of Daniel’s portrait, dedicating 80 per cent of the profits to its protection.

“Why not put it to some use to create a benefit, rather than just for art’s sake?” Daniel says.

Ginette says she, too, was inspired to action during the trip.

“When I see that picture, I see the soul in its eyes. Because I’ve seen that animal up close. I see the people, I see the jungle, and I fear the end. If we wait five years, there aren’t going to be any more gorillas left. It has to be done now. We’re trying to be a voice. We have aresponsibility. The gorilla doesn’t have a voice. It can’t speak for itself.”

The Cross River gorilla is one among many of the world’s primates that are in grave danger.

The International Union for the Conservation of Nature and Natural Resources, which is the recognized international authority on animal conservation, revealed in its latest “red list” report that at least 29 per cent of all of humanity’s closest genetic relatives are in danger of extinction.

The Cross River gorilla is named for the river that winds through the Lebialem highlands. Less than a dozen groups of no more than 20 live there in clusters 10 kilometres apart, and also in the Bechati-Mone forests in areas along the Cameroon-Nigeria border. Their combined habitat is less than 8,000 square kilometres.

The Cross River gorilla is distinguished from other species by red fur crests on their heads. They are highly intelligent: scientists recently documented their use of tools (testing river depth with sticks before crossing) and weapons (throwing sticks at humans to keep them at bay, where other gorillas charge or flee) in the wild.

The greatest threats to the gorilla’s survival are logging, slash-andburn agriculture and poaching and hunting for bush meat. It is illegal to kill gorillas in both Cameroon and Nigeria, but enforcement is lax. The limited number of mature adults – estimated at 50 – and their fragmented range put their future reproduction – females have offspring every three years – at risk of inbreeding and loss of genetic diversity.

Yet dramatic rescue efforts are under way.

The Great Ape Project, a consortium of international scientists founded in 1993, is lobbying to secure a United Nations Declaration of the Rights of Great Apes.

The project hopes to secure higher primates the legal rights to life, the freedom of liberty and protection from torture to ensure their protection and survival.

Meanwhile, the Nigerian government has preserved Cross River habitat in a series of parks, including the Cross River National Park and Afi Mountain Wildlife Sanctuary.

The Cameroonian government has recently followed suit, pledging to create two protected areas: the Takamanda National Park and the 19.5-square-kilometre Kagwene Gorilla Sanctuary in the highlands.

The Taylors are doing their part.

The couple’s path to the Cross River gorilla began when Daniel, a professional high-realist painter who had completed several animal portraits in support of conservation charities, decided to paint a
gorilla.

With a fellowship from the Ontario-based Artists for Conservation group, the couple joined the U.K. charity African Conservation Foundation to paint the animal, fundraise for its preservation and raise awareness.

During their trip, they trekked into the gorilla’s jungle habitat, studied and sketched the only Cross River gorilla in captivity at the Limbe Wildlife Centre, held workshops with local artists, staged media
events and taught local schoolchildren about gorilla conservation with art classes.

They visited several local villages, including M’ockbi-Alou, where residents were the most involved in hunting the gorilla and other primates. They encountered locals selling dead monkeys on sticks.

“The villagers had the traditional belief that the gorilla was a totem,” Ginette explains, adding that killing one confers power and prestige.

The ACF has a director on the ground in Cameroon and has formulated a plan to help villages surrounding the gorilla’s habitat in Cameroon to develop sustainable farming and livestock practices to decrease pressure on the gorilla.

Already, 11 local chiefs, or “fons,” have signed an agreement pledging to stop poaching the gorilla. To ensure they keep their word, the ACF wants to introduce small livestock projects (raising cane rats and porcupines) to reduce village reliance on bush meat, to hire locals as gorilla trackers and guides and to educate youth about conservation.

The gorillas, he says, “deserve their place on this planet. Why should we destroy them out of greed or need when the need can be met in other ways?”

The Taylors say the project will cost $10,000 per village. They hope sales of Daniel’s paintings will help get some of the projects started.

According to the ACF, the ultimate aim is to learn more about the apes through research and set up protected habitats managed by locals.

“Daniel and Ginette Taylor are true ambassadors for the Cross River gorilla,” said ACF director of conservation Arend de Haas. “They have understood that if we don’t act now, this species will disappear from our planet.”

ACF president Jeffrey Whitting has called the Taylors’ expedition “particularly important given the critical state of this little-known population of gorillas.”

The Taylors say they are happy to have seen the gorilla and proud to offer their help.

“The way they look at you: it gave me chills. It’s an endangered animal, and to finally get to see it and go into its jungle . . . it’s a privilege. You can’t go and see them and not want to try to help. And you can’t help the gorilla unless you help the people. We’re showing people over here that something can be done.”