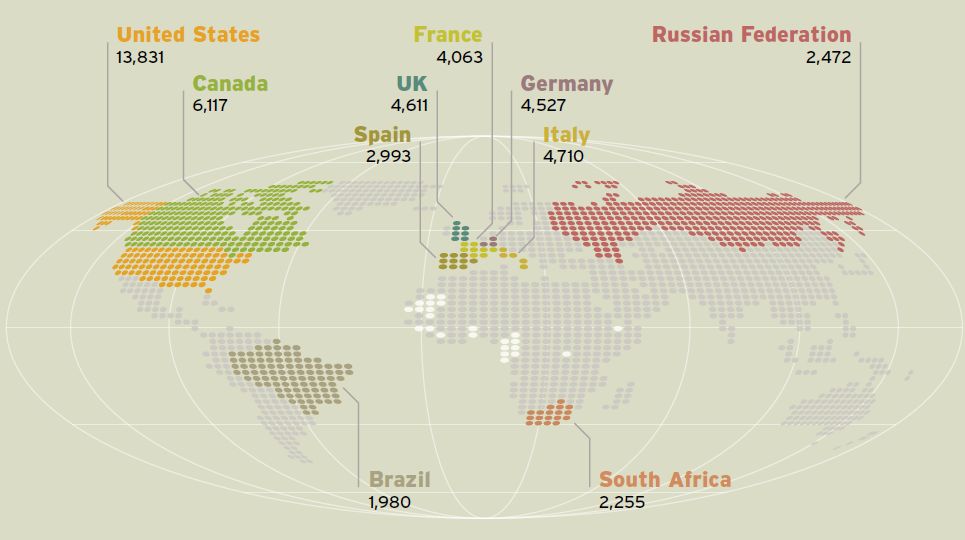 Nearly 75,000 people have signed a petition started by the African Conservation Foundation to support the establishment of a Cross River gorilla reserve in Cameroon. People from around the world expressed their concerns about the protected status of these critically endangered great apes.

On the first of March 2013, the conservation community was shocked about the brutal killing of a silverback male Cross River gorilla in Cameroon. The gorilla had probably strayed from the proposed Tofala Hill Wildlife Sanctuary in the Lebialem Highlands. It was killed by the people of Pinyin, a village in the Santa Sub-division, Northwest Cameroon.

Cross River gorillas are the rarest and most threatened gorillas, with only 300 individuals remaining in the wild. The proposed Tofala Hill Wildlife Sanctuary hosts about 40 of these gorillas

“The killing incident stressed the importance of establishing great ape reserves in the area where the gorillas occur”, said Louis Nkembi, director of the Environment and Rural Development Foundation. “The proximity of the place where it has been found to human habitations is also an evidence of the pressure faced by gorillas.”

A global petition signed by 75,000 people was hand-delivered to Ngolle Phillipe Ngwese, a Cameroonian politician and a professor, currently serving in the government of Cameroon as Minister of Forestry and Wildlife.

As a direct result of the petition, and the concerns that have been raised by Cameroonian and international NGOs, meetings were held with government officials and the process to officially gazette the Tofala Hill Wildlife Sanctuary was accelerated.

The official investigation, led by our local partner, the Environment and Rural Development Foundation, established that the murder of this gorilla was ordered by the head of the gendarmerie brigade based in Pinyin who claimed it as an act of “self-defence”. However, from the investigation conducted it was evident that the gorilla was killed out of excitement on the part of the Pinyin people.

The Regional Delegate for Forestry and Wildlife for the North West Region, Mbah Grace, regretted the loss of this Cross River gorilla and re-iterated the efforts of her Ministry to increase community sensitization in the border areas of the proposed Tofala Hill Wildlife Sanctuary.

Local communities are in favour of the establishment of a reserve, as they do not want the Cross River gorillas and other endangered species to disappear.

Some Tofala Forest adjacent villages like Fossimondi, M’mockbie, and Nwangong, who before resisted the gazetting of the Proposed Tofala Hill Wildlife Sanctuary have declared profound support to the gazetting of this biodiversity hotspot in the Lebialem Highlands.

“Gazetting the Tofala Rainforest is a very good idea. The area is rich in wildlife; both plants and animals and will bring in tourists into our communities. We understand the importance of wildlife conservation. In my village, we are in favour of complete protection of this forest”, Manasseh Jong, a Folepi Village Elite said.

As a result of the petition, the Cross River Gorilla programme has the potential to move forward with the development of new protected areas, including innovative models of co-management.

“We want to thank all people who helped send a message to the government of Cameroon supporting the conservation of the gorillas,” said Arend de Haas, Executive Director of the African Conservation Foundation. “The Lebialem Highlands – along with the other biodiversity hotspots in the area – constitutes an area of economic and ecological importance that will drive ecotourism, which in turn supports local entrepreneurs and create much-needed jobs. It is counterproductive to deplete the country’s natural resources.”

The Cross River Gorilla Programme is generously supported by the Taiwan Forestry Bureau since 2004, leading to the establishment of three new great ape reserves.

75,000 signatures equals one person speaking out for Cross River gorillas every 7 minutes for one year! You can join the Cross River Gorilla Programme as a volunteer. Please sign up now.

Explore more infographics like this one on the web’s largest information design community – Visually.